I met Josh and his partner Andy, at the Rockingham Writers’ Convention last year. I was slightly star-struck, after reading Find Your Creative Mojo. They are charming and loads of fun to chat with.  Josh has walked the walk, which gives his books such power to help children and adults while dealing with their anxieties.

What do you like to do when you are not writing? Sitting on my verandah with my husband watching the sunset over the valley enjoying a glass of wine (or several).

What did you want to be when you grew up? When I was 6, I wanted to be a train driver because seemingly all you had to do was toot the horn and wave at people as you went by. Otherwise, I’ve never had any idea what I wanted to be when I grew up. As long as it wasn’t a normal boring job! I think I’ve succeeded in that; radio announcer, radio copywriter, author/illustrator, photographer, abstract artist, part-time afterlife investigator… who knows what’s next? 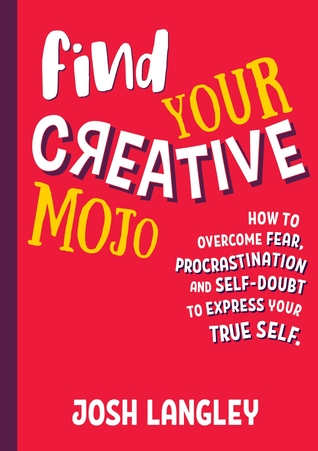 What’s for dinner tonight? What would you rather be eating? Andy is cooking southern style chicken schnitzels and garlic roast veggies and it suits me just fine.

Can you cook? Are you practical? Yes, I can cook and quite enjoy it. I’m lucky, that both Andy and I enjoy cooking so we have lots of yummy meals. My favourite is Tortellini. (There’s a recipe for Lemon and Parsley Tortellini on page 54 of Being You is Enough if you’re interested.) 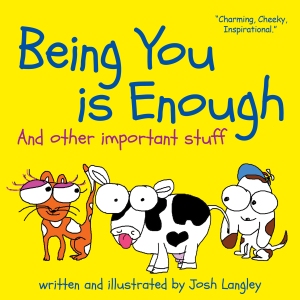 Breakfast or dinner? Dinner definitely. Unless breakfast is something exotic like Parathas and onion bhajis…. (Or leftover Tortellini )

Your hero? I don’t have heroes, but there are a few people who I admire, such as Michael Leunig. I got to meet him at last years Margaret River Readers and Writers Festival (we were next to each other in the program guide, Langley / Leunig) and I was a blubbering mess. I couldn’t say anything interesting or clever, just ‘Um, I’m a big fan… Can I have a selfie?’. Sonia comments that’s so much like I was when I met you!

If you could choose three people to invite for a dinner party, (Living or dead) who would they be and why?

Iggy Pop. He could tell some awesome rock and roll stories. The late Anthony Bourdain. He could also tell some greats stories about people, food and travelling. My husband Andy. I couldn’t let him miss out on all the fun!

What time of the day do you usually write?

I prefer mornings, the earlier the better but not like 3.30 (I did that once when I set the bedside clock wrong after a blackout) more like 5.30 onward.  However, if I’m drawing illustrations, that can be anytime.

What is the most difficult part about writing for you?

I have a really short attention span when it comes to writing and rarely gets into the flow. I’m constantly checking Facebook, getting up to snack on something or walking around outside. Oh, look! Is that packet of pretzels? Yum!

What is your work schedule like when you are writing?

All over the shop like a mad dog’s breakfast. There is no structure. When I was working 4 days a week, I used to get up at early and write for an hour before work, but now that I work from home all the time, there’s no structure at all. I’m trying to write a memoir on childhood trauma at the moment and I haven’t found my rhythm as yet, but I’m hoping it’ll come. Maybe pretzels will help.

What would you say is your most interesting writing quirk?

I can write anywhere. The kitchen table, office, beach, café etc. It doesn’t matter. I know that’s not quirky, but very handy!

Do you hear from your readers much? What do they say?

I get a lot of feedback from parents telling me how the kid’s books have made a big difference in their child’s lives. Especially kids who may be a little different or who don’t feel ‘normal’ for whatever reason. They say that the books have started great conversations and led to all sorts of life-changing insights for both the kids and the parents. That makes all that I do worthwhile.

How has being a copywriter influenced your writing style?

Radio copywriting is all about distilling big concepts down into simple easy to relate to messages, which means using as few words as possible. It’s the same for kid’s books. I take big concepts such as emotional and mental well-being and all that’s associated with them and break them down into powerful short sentences and then marry them with simple cartoon-like illustrations. It’s the art of saying more with less.

I guess that in copywriting you work to appeal to emotions, does that carry over into your writing?

Yep, advertising is all about connecting on an emotional level and that is the same for writing non-fiction and kids books. Even though I’m not a traditional storyteller, the way I shape a story is to go direct to the heart of the reader and make a deep connection that way. Cut straight to the chase but have fun while doing it.

I think you have said that you write your children’s books for the kid you once were. I know that many, many kids and adults relate to them.

Yes, I write the books as though I was giving life advice to my 8-year-old self. I think there are only a handful of kids authors who are in the same boat as me (Todd Parr for example) as most are either teachers, educators, librarians, in the child development field or have kids themselves and I don’t fit into any of that. So writing the books for myself made sense and it was healing as well, as I had experienced childhood trauma and through the books, I was able to reassure the younger me that he is OK the way he was and that he is loved. I think parents can relate to the same message because it’s something they wanted to hear when they were young too.

Do you have a favourite character that you have written? If so, who? And what makes them so special?

I love Graeme the Giraffe, the cover boy for Magnificent Mistakes. He represents the confident, playful happy go lucky kid in all of us. He’s not too concerned about what other people think of him and he’s willing to give new things a go. He wants to wring the most out of life.

Do you think someone could be a writer if they don’t feel emotions?

Everyone can feel their emotions in some way, even if it’s getting angry at a bus being late! However it’s being able to tap into that emotion and transfer it to the page so that everyone can relate to it, that’s the trick.

What was the best money you ever spent as a writer? My laptop. I love it. I really do. I think I spend more time with it than my husband!

Many people won’t have heard about your exploration into the afterlife. Personally, I’d like to thank you for doing things I have always been too scared to do. You have two books about this, don’t you?

Yes, ‘Dying to Know: If there life after death’ and ‘Turning Inside Out; What is everything we’ve been taught about life is wrong?’ both on my website.

I’ve always been interested in ghosts, the paranormal and afterlife topics and I was desperate to see if could have a personal experience of some kind myself. When I was planning the outline of Dying to Know I knew I had to include a ghost investigation, however, I couldn’t think of anywhere that I could have easy access too. Then one of my work colleagues mentioned in passing that he thought the radio station he was working at was haunted in some way. I remembered I had worked there many years before and thought the same thing. Bam! I had my haunted building! It’s not often you get to play ghost investigator, but it was heaps of fun, yet very scary at the same. It’s the kind of adrenaline rush I love. While some people like parachuting out of a perfectly good plan, I like to see if I can come face to face with a ghost!

How many unpublished/ half-finished books do you have?

1 novel, 2 kids books, a photographic book, and other stuff.

QUESTIONS FOR FUN (or maybe not!)

What are you reading now? Irritating posts on Facebook!

What books or authors have most influenced your writing? I really got a lot out of Stephen King’s On Writing.

Is there an author you most admire in your genre? Maurice Sendak (Where the Wild Things Are). His personal story always brings a tear to my eye. He kept his homosexuality and his 50-year relationship to his partner a secret from his Jewish parents because he didn’t want to disappoint them. If I could give him a copy of Being You is Enough and give him a hug, I would.

Favourite quote: “Find your own lane” – Diane Evans (my editor)

Favourite book when you were a kid? Rhyme Giggles, Nonsense Giggles, written by William Cole and Illustrated by Tomi Ungerer

Do you think being in a supportive partnership has helped your confidence and creativity?

Hell yes. I’m lucky that Andy is so supportive and encourages me to keep going with my projects. It also helps that he’s a writer and creative type as well, so we’re both encouraging and supporting each other. Mind you have been known to fight over the little writing desk on our library!

Find all about Josh and his books at www.joshlangley.com.au