Double trouble in June /July for me.My desktop crashed-June 23rd  and shortly afterwards my internet connection  also stopped working. It has been forty-four days minus the desktop and a little over three weeks without the internet. Fortunately, I have been able to read.

Sail Away by Celia Imrie.

Actress and author Celia Imrie tells this story in her own inimical style.Its a delightful story of women of certain age taking chances and making changes. Embracing the  posstiblities of now. The author’s  depth of knowedge of both acting and luxury cruising make this a lively and entertaining read.

The Strawberry Thief  by Joanne Harris

How could the Chocolat story continue?  Joanne Harris returns us to Lansquenet-sous-Tannes, and expands Vianne Rocher’s story. Things have changed in the sleepy town, old rivalries forgotten and even the wind seems content to let Vianne stay put. This is a book that reflects on motherhood and having to let our children grow and change. Vianne’s late child Rosette is ‘different,’ like a wild creature she senses things and has never spoken. Anouk, Vianne’s older daughter has gone to Paris  to be with her boyfreind and Vianne  misses her. It means that she cherishes her life with Rosette even more.When changes come to Lansquenet with the arrival  of a mysterious  and charismatic stranger ,Rosette also begins to change. And Vianne  has fears for her younger daughter.

I enjoyed the blend of fact and fictional reality ,which drew me in and kept me engaged with the characters and their situation. To be a Wolfskin was to be regarded as among the best of fighters. Reputation and honour figure large, as does trust and friendship. Neglected Pictish culture and mysticism are explored.While the raiding and conquering  the Vikings have their own code of honour.

On the Same Page by Penelope Janú

MIles Franklin is the daughter of a literary family- who would be horrifed to know that she writes romance- a genre they despise. Of course, her subterfuge is bound to come out, especially when her girl Friday enters her for prestigious literary award  Add into the mix a handsome publisher, who wont take ‘no,’ for an answer and who insists on  meeting the reclusive ( and fictional) author . Entertaining.

Once Upon A River by Diane Setterfield

I loved her first book, The Thirteenth Tale, an all-time favourite .Sadly, I  wasn’t as thrilled with her second, so I approached this book hesitantly. I need not have worried – it’s a brilliant book  It combines some history of the river Thames ( the river in the title) with an almost fairy-tale feeling story about generations of storytellers and the folk tales of the mysterious and unpredictable river. Abduction, murder, identity theft, are all deflty woven into the plot ,which has a magical quality. I have recommended the book to many people. For me, it’s a 5 star winner.

I was browsing the library catalogue looking for a cosy mystery to read prior to a workshop on  writing cosy mysteries.This title popped up and as I had never heard of the author, I decided to give it a go. There are numerous books in the long running series.It has an ingenious plot, but not having read  any of the  previous books I felt disadvantaged  by people and references to previous  events  It has an Agatha Christie feel about it, and the series  is very popular ,but for me it didn’t really fit into the cosy category .

Creating Characters from the Editors of Writer’s Digest.

If you are struggling creating characters, then this book is for you. It has a wealth of information from a range of wrietrs. It is easy to read and you can skip between sections and  chapters. A very useful book

The DandelionYears by Erica James. 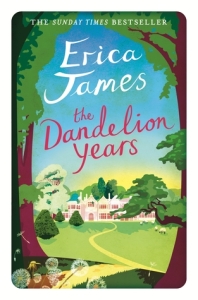 A charming story of inter-generational living which highlights both its benefits and its dilemmas. Love and loyalty, family ties, secrets, disappointments. Of course, there are also romances,  poignant and sweet.The book is about the loovongly described  setting, and the craft of book binding and restoration,book shops and book selling – things that appealed to me.

The Forgotten Letters  of Esther Durrant.

I was fortunate to win a copy of this book and what an eye opening experience reading it was.
Readers may be shocked to learn that in the 1950s women could be confined to a mental home if they suffered from a prolonged post-natal depression. Esther’s is only one of three stories which interlink at some point to form a cohesive whole. This is a thought-provoking book which would be perfect for book clubs. Highly recommended.