Attending the Rockingham Writers Conference this weekend, I thought what a gregarious and chatty crowd we were. So different from the stereotypical introverted, social outcasts we are supposed to be. 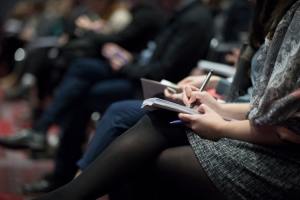 Individually these were people who admitted to self-doubt, imposter syndrome, insecurity, fear of failure and fear of success.

That day though, all that was put aside, and we had a ball, laughed and talked mingled, shared expertise and gossip. I left the conference buoyed with confidence and thrilled with my writer tribe.

Then I began to wonder what a group of writers was called. I couldn’t recall an official term, so I did an internet search. I got  ‘a worship of writers. ’  To me, that seemed more fitting for priests, so I began to think of collective nouns for writers.

Here are some I  liked

A chapter of writers.

A procrastination of writers

A draft of writers

An insecurity of writers

An imagination of writers

A  scribble of writers

A cacophony of writers

A gossip of writers

A journal of writers.

Do you have a favourite term for a group of writers?