Like many people, I was battling with the restrictions and limitations of our Covid 19 world. This meant no visits to the library, which was closed. Like many readers, I have amassed a significant To Be Read Pile, otherwise known as TBR. What is in it?  It’s a mixture of books I had bought and never started, books I’ve been given, and books acquired at book swop.

Also, I have learned to love my Kindle. It was an under-appreciated Christmas present that has finally come into its own. Plusses are that it has a book light making for easy reading in bed and the ability to adjust the text size which I have appreciated since an eye operation.

One from book swop, with the tagline, “Two missing children. One lost copper.” This is book five in the Peter Grant series, and it would have helped enormously if I’d read the previous four. That said, it was still an enjoyable read, although I suspect some in-jokes and references went completely over my head. The police presence mixed with the supernatural gave it an unusual and amusing twist. Peter Grant is both a cop and a man with an aptitude for magic.

The Lives of Christopher Chant by Diana Wynne Jones illustrated by Tim Stevens. 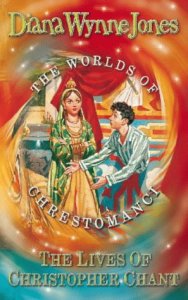 Another children’s’ book from my TBR pile- this book is a precursor to the popular ‘Chrestomanci’ series. As I hadn’t read any of them, I started the book with no preconceptions. It is an engaging story of Christopher, a rather lonely boy, who finds out that he has a destiny. His parents are aloof, his mother beautiful, but always out, his father important and busy. When his uncle takes an interest in him, he’s flattered by the attention. The next bombshell is he’s to be sent away to school. Unexpectedly, he finds fun and friendship at school and as a love of cricket. Then, he is unceremoniously removed from school. Sent into the guardianship of a wizard to learn magic. He is to become the next ‘Chrestomanci.’ magical guardian of all wizards, but he proves inept at magic. However, unknown to anyone else he can go to a place he calls ‘the in-between’ a doorway onto other worlds. The revelation of this secret increases the danger, that he and everyone else is in. Reading a children’s book as an adult, you pick up more of the hints and nuances that would have bypassed you as a child. Even so, there were still a few surprises.

This anthology is stylishly put together, and the contents do not disappoint either. Ten Australian Authors write stories filled with canine capers, disarming and distracting their human companions. In Stonecrest Bay, at Dee’s dog grooming salon The Funny Bone, dogs always come first. All doggy life is there. The good dogs and the naughty ones. They steal not only their owner’s hearts but yours too. The town is abuzz with a local fundraiser for the Fireys*, and the upbeat vibe catches hearts unaware as they fall under its spell and give love a chance.

* Fireys  is  Australian slang for the fire fighting  men and women

Starting Over At Acorn Cottage by Kate Forster.

As a fan of the TV show Escape to the Country, I was anticipating enjoying this book and I did. However, there is far more to the story than the charming cover might have you imagine. Clara has bought a country cottage over the internet. A betraying boyfriend and best friend and too much wine can do that to you. I snorted with laughter at the nicknames she came up with for the dubious duo.

Inevitably, the pictures don’t tell the whole story- the place is a dump and Clara has nowhere else to live. She need help and fast and it arrives in the shape of Henry, the thatcher who can fix anything. Henry has a daughter Pansy and they live in a gypsy caravan. So far, so predictable. The village of Merryknowe has its mix of strange inhabitants. There is Tassie who is a grandmotherly/ tea leaf reading/ knowing things type. Rachel at the teashop, a sad wisp of a girl, whose storyline is particularly sad. The plot deepens with the addition of these characters and in helping them and being helped by them Clara also helps herself. Despite its light cover, there are serious issued addressed here with family violence and domestic abuse. This might be upsetting for some readers.

The Paris Secret by Natasha Lester.

I was fortunate enough to win a copy of this book in a book giveaway, otherwise, I would have bought it. Every book Natasha Lester has written has surpassed the previous book. The Paris Secret continues this trend, it is superlative and compelling storytelling.

Much of Natasha’s success is in combing topics which interest her and resonate with her readers, such as travel and fashion. The bonus is that she then combines them with historical research into lesser-known topics to craft a compelling story. The authors note at the end of the book details much of this research and show how comprehensive the research process was.

Natasha takes the research and brings it to life, peopling it with characters that we come to care about.

Like Skye Penrose, surely with a name like that she was born to fly? One of two illegitimate sisters to an unconventional mother Skye enjoyed an almost idyllic childhood in Cornwall. As someone who spent part of my childhood in Cornwall, I enjoyed reading about Skye’s halcyon days with Nicholas Crawford an American boy who is destined to return to the States.

Later, when Skye joins the war effort as an Air Transport Auxiliary (ATA) pilot the trials and humiliations these women endured just to do a vital job were almost unbelievable. They faced male patronage, misogyny, and hostility in breathtaking amounts. All this is based on documented fact. If we bear in mind that these women were middle class, educated women, who had the funds to be able to learn to fly-  we can only imagine how lower-class women were treated. To still undertake the jobs given to them, to fly in freezing conditions in an open cockpit plane. To smile, to boost male morale, to be treated so poorly and expected to perform to impossible standards. Every single one of those women was a heroine who deserves our respect and thanks.

Christian Dior, that iconic name in fashion had a sister Catherine. The famous Miss Dior perfume is named for her. Again, a little-known story, she was part of the resistance and was captured in 1944 and sent to the infamous Ravensbruek concentration camp. This makes grim but compelling reading.

When Skye meets Nicholas again, he’s engaged to a Frenchwoman  Margaux Jourdan. So, they can only remain as friends and in the camaraderie and tensions of wartime that has to do. But can it be enough? Nicholas still has feelings for Skye and she for him, but he’s an honourable man.

In present-day Australia, Kat Jourdan is a fashion conservator. Sent on a mission by her grandmother Margaux Jordan to visit Cornwall. Kat becomes fascinated by what she has discovered and what she has still to learn. And then there is a collection of sixty-five priceless Dior gowns. They are so well described; it is easy to visualise them and to covet them.

This book takes a reader on an emotional journey, one that makes you laugh and cry, exclaim at the courage and weep at the baseness of some of humanity. Unforgettable.

The Virgin’s Promise by Kim Hudson.

I didn’t know how much I needed this book until I read it. As a writer trying to tell a female story fitting it into the heroes journey concept has always felt unsatisfying to me, and now, I know why. The stories may intertwine, but they are immensely different. I found myself nodding as various points were raised. It was like finding the missing piece to a jigsaw, everything finally made sense. I had a submission to complete and using these concepts made it easier and I think more emotionally satisfying.