Hi Annie and thanks so much for joining us today. We will start with some getting to know you questions, then move on to your writing and art.

What do you like to do when you are not writing?  My favourite is swimming in the sea and next is sailing

I didn’t expect to grow up as I am lucky to survive my childhood – my mother was an alcoholic who abused and neglected me. She tried to kill me, the first time when I was about four when she stripped me to my undies and locked me out of the house all day in the middle of a Melbourne winter – I got pneumonia and was very ill. The second time I was about eight and she slashed my right wrist and throat with a razor. Both times were when my father was away. I think she believed she was sacrificing or saving me.  I survived the pneumonia and glandular fever which left me with lung and heart damage. I made 80 last year!

Sometimes I share because telling others who have suffered and survived that you  understand and care can make a difference, and keeping silent, as I was raised to do, perpetuates the damage of child  abuse and neglect

What was your dream job when you were younger? I wanted to sail away, or fly like a bird, or write stories and make pictures.

What’s for dinner tonight? What would you rather be eating? Not sure about tea tonight, but a takeaway would be good. Something new and different – except coriander.

If you could choose three people to invite for a dinner party, who would they be and why? Tyson Yunkaporta; he’s aboriginal and an advocate for indigenous culture, as well as a creative performer and artist. I would love to yarn with him.

Anh Do: came to Australia in a refugee boat, he became a comedian, artist (stunning portraits in his ABC show), and writer for young people. He’s creative in many fields – and funny and smart.

Julia Gillard: past prime minister of Australia. She was an outstanding leader, brave, and ethical and still a mental health advocate and strong woman.

They are all creators in different ways and from different origins that exemplifies our dynamic culture. From all the lands on earth we come – They affirm our unofficial anthem We are one – we are Australian.

I have a girl-shed for artwork and a ‘Do not disturb – genius at work’ sign in my corner in the back room with my PC  and my home gym so I can get up and workout a bit when the flow stops. S.B. comments Lovely-love the genius at work sign.

How do you decide if an idea will be a story, a poem or an artwork?

It’s not a decision – some ideas come visually, some in a flash as a poem (usually when I’m travelling or walking) and then some are stories to be told over time. 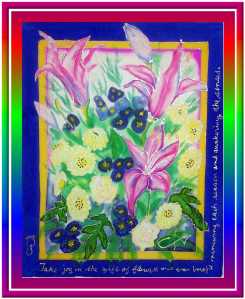 For those unfamiliar with your fiction how would you describe it?

I decided to write romances when I retired but was totally no good at it – my attempt turned into the first book in the Travellers Trilogy which could be described as Adventure/Romance, as there’s a lot of adventure and intrigue and a powerful love story. My latest book is The Swagman Saga, a colonial myth, and this could be an Australian historical fantasy, I guess.

Is there a typical writing day?

When I’m writing, which I’m not currently, I grab the time when I can. I’m not an owl, so usually in the morning, but afternoons or evenings too, depending on what’s happening.

What is the most difficult part about writing for you?

Editing. It costs too much for me to have my m/s professionally edited, and I’m grateful for a friend who edited the trilogy, but he couldn’t edit the Swagman Saga, so it’s published with all its faults, which I’m sure are many and diverse.

What would you say is your most interesting writing quirk?Don’t think I have one. I just hammer away and try to keep up with the characters as their lives unfold.

When you’re writing an emotionally draining (or sexy, or sad, etc) scene, how do you get in the mood?

I’m the watcher in my stories, so it’s like seeing a movie. I’m often surprised at what is unfolding, and react to the tragic, scary, passionate or violent events.  I’ve been saddened by the way the lives of some characters unfolded and I usually intervene at the end, as I write to give hope, not to create sorrow and despair.

Do you have a favourite character that you have written? If so, who? And what makes them so special.

The truism that we are all our characters. I most admire the courage and devotion of Aidan, and Matilda; the adventurous spirits of Greta and The Swagman; and the dogged and persistent Old Grey Mare, – as they are the best of me; but I have to acknowledge myself in the troubled Gwen/Selina; and in the evil Tobias, and the shape-changing monster, Captain Sharman.

Why did you choose to self-publish, and use a pen name?

The rejections made me feel like a failure. Although I understand this is usual and it can take many years of rejection before a writer is successful, I was around 70 when I started writing novels and I thought I didn’t have that long to wait. I know my work doesn’t fit a commercial mould so I decided that I would write my own way. I feel I don’t need to write to a market as I don’t expect ever to write for a living, although I’ve covered my costs

I chose to use my maiden name as I wanted to disassociate my work from my everyday identity. I Googled it, and it wasn’t being used, since then two other M.A. Hills have appeared – one writes about chakras and yogic stuff which is OK, but the other writes lurid romances. Should have stuck with Otness.

Are you currently working on a new book? Will it carry on the stories from the trilogy or The Swagman?

I have started a young adult series called The Theriant, (Theriants are shape-changers).  I find this concept not only fascinating, but a great way to create diverse p.o.v.  I’ve written the first book and the first draft of the second and have the outline for another one. The protagonist is a mutant hero called Crystal Stone whose mission is to save the world. The first one – The Flight of Crystal Stone, is about its/her coming of age but after letting the work rest and coming back to it, I realised I must revise  it, as the first part could be cultural appropriation, and also doesn’t fit the story as it developed

Who is your favourite author and why? So many: Tyson Yunkaporta –  I’ve just read Sand Talk, and this was extraordinary– confronting – validating some of my concepts and challenging others. I’ll need to read it again.

Peter Fitzsimons; Australian history – he tells the true story and brings it to life.

Kem Nunn, writes stories with so much empathy about surfing and of people that I feel I know.

Liu Cixin  – The three body problem. His dystopian future could become the new reality aka Wells’ War of the Worlds  – Chinese viewpoint is enlightening.

All different and really great reads.

What book is currently on your bedside table? Kim Scott’s Dead man dance, Qi Gong, Me and the boat and a man named Bob, by C.E. Bowman (friends have told me it’s the best book they’ve ever read – Bob is Bob Dylan!) Moab is my Washpot – Stephen Fry.

I prefer to read eBooks now as the range is limitless with wonderful free library apps. I have about 3,000 books (I’m used to having shelves of books around I guess after 25+ years in libraries), and eBook loans suit me now.

What books or authors have most influenced your writing?

James Joyce, The Dubliners, I read at 18 and it reset my brain. After being schooled on Eliot and Thackeray, that were so alien to my life and culture, I couldn’t relate to them at all. Joyce opened the window to the wide universe of possibilities.

Tim Winton, because he writes about my kind of world, and I realised that we can tell the stories about places and lives we know. Rabelais Gargantua and Pantagruel because he is wildly inventive and bawdy and funny.

Cervantes because he wrote the ultimate quest,and many other authors.I think everything I read has some influence.

Who is the author you most admire in your genre?

Norman Lindsay, Tolkien and Terry Pratchett – for fantasy sagas, Susanne Collins’ The Hunger Games for YA. I  don’t write to a genre but admire so many authors – I’ll pick  Melissa Lukashenko, Too much lip as adventure romance. Poetry – Les Murray. Don Williams for theatre (I’ve written a few plays that I produced and directed at the Pocket Theatre – great loss that it closed down.)

SB. That quote is very pertinent at the moment!

Favourite book/story you have read as an adult / ‘Sea Sick’ by Alanna Mitchell had a life changing effect on me and made me realise that I had to fight for the well being of the oceans that I love and voyage on.

Favourite book when you were a kid? Alice in wonderland and through the looking glass. I was sent to the care of strangers for a few months at about 9 and was allowed to take one book –  Lewis Carrol was in hindsight such a good choice, with a strong, resilient, resourceful girl hero alone in a weird world.

What famous author do you wish would be your mentor? Shakespeare – I think he’s the greatest writer ever even though I don’t read in other languages.

I’ve included a few of the quilts, which are made from silk paintings with shibori dyed panels.

SB I asked what Shibori was .

Shibori is a Japanese tie dye craft that gives a streaky effect.

M.A. Hill  was born once upon a time in Tasmania, lives near Fremantle, Western Australia.  She is an award-winning writer, playwright, poet, and artist – working in paint, textiles, and clay.

A blue water sailor and activist for the marine environment, her journey is one of survival that has taken her on trackless voyages where few have ventured. In her work she strives for a better world. As Annie Hill Otness, she has published –

Talismans – ‘anything whose presence exercises a remarkable or powerful influence on human feelings or actions.’  Source: Dictionary.com

As M.A. Hill she is the author and illustrator of The Travellers Trilogy and The Swagman Saga.