June was a good month for reading as I read seven books almost all of them were fiction. I like to try different authors and genres as well as reading nonfiction.  Here are this month’s selections.

The Dark Lake by Sarah Bailey 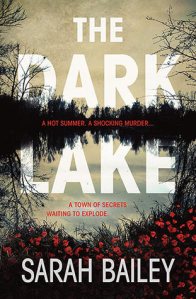 I don’t want to give plot details away, so of necessity, this review will be non-specific. I was fortunate enough to win a copy of the book in a giveaway but was under no obligation to review it.
I think the book is well written, but I found it hard to warm to the protagonist Gemma Woodstock. She is obviously a dedicated detective and this time the case is personal. While I found the hint of intrigue about the past worked well initially, I grew impatient with the continual repetition and non-disclosure. The book had an unpredictable ending, overall, I didn’t find it a satisfying read

This is fiction based on fact and tells a remarkable story of how an American Socialite and philanthropist Caroline Ferriday made a difference to so many women’s lives. Always a Francophile and a volunteer at the French consulate she was gradually drawn into working far more closely with women who had been incarcerated and brutally mistreated in the notorious Ravensbruek concentration camp.
Initially, I found the triple timeline somewhat confusing as each woman’s point of view was presented. American Caroline, Polish Kasia and German Herta. It was worth persevering because this is a story that needed to be told. Unimaginable horrors and deprivations, cruelty, and kindness death and despair, hatred and forgiveness. This is a memorable story, meticulously researched and beautifully written quite unforgettable. The authors note details the research and the real people whose lives were impacted by these terrible events.
Note Caroline Ferriday and Herta Oberhauser were real people Kasia is a composite of many of the Polish women who were held in the

A great book for trivia lovers and those interested in finding out quirky facts about Britain. Not a book to read at one sitting. This is a book to amuse and delight, but one that is probably best read in small doses. There is a temptation to read out many of the amazing facts and bits of information to your long-suffering family.

A few snippets which amused me.  In 1879 Belgium trialled using cats to deliver the mail. The thirty-seven cats did not cooperate, ( who would have thought that!)and the trial was abandoned.

The Queen carries several items in her handbag, including a handkerchief, lipstick, spectacles, a folded five-pound note and a handy suction hook to stick under a table to hold the bag itself

My favourite though is that on April Fool’s Day 2010 The company Gamestation inserted a clause in their online contracts which enabled them to claim their customer’s souls.

The Cleaner of Chartres by Salley Vickers

An unknown woman arrives in Chartres and stirs up forgotten feelings and prejudices. Each person sees something different in Agnes Morel with her dark skin and topaz eyes. She cleans the famous Chartres cathedral. Does the cathedral influence her as she polishes the labyrinth walk? Can a wrong ever be righted? Can a sinner find redemption? Is holiness more important than kindness? Everyone has an opinion about her. The town gossips Madame Picot and Madame Beck spend their time speculating about her past. Abbe Paul from the cathedral, Professor Jones and Philippe Nevers all have a certain fondness for Agnes. While Robert, the painter uses her as his muse, model and mistress. Dr Denman wonders if he did right by Agnes. Alain the restorer wants to help her to find her own identity. The nuns’ Mother Veronique and Sister Laurence knew Agnes years ago and their intervention in her story is not the happiest of events,
We saw each person’s perception of Agnes but each time there was something of their personality in the observation too. Was Agnes more sinned against than sinning? Judge for yourself.

The Yellow Villa by Amanda Hampson

Despite its charming cover, this story has more involved in it than you might at first imagine. A young Australian couple Mia and Ben, buy a villa in France hoping to make a fresh start. They meet a sophisticated older couple Susannah and Dominic and are initially impressed with the pair of Expat Brits.
Throughout the story, fresh information is revealed and the veneer of each couple’s ‘perfect’ life gradually discloses uncomfortable truths about their relationships and each other. I thoroughly enjoyed it.

Water Under The Bridge by Lily Malone

The characters were well drawn, and the story events were intriguing. The relationship between Ella with her son was realistic, a boy out of his depth missing his old life and friends. Ella is challenging herself embarking on a new career, selling real estate and trying to put her past behind her. Handsome Jake is a complication that she doesn’t need, and he’s the owner of the house she has listed to sell. It’s inevitable they will keep meeting.
The story while complicated is certainly feasible and is the beginning of a series by Lily Malone